Working in the Dev Team at ProspectSoft

By Adam Biggs on Tue 26 January 2021 in Placement Blog 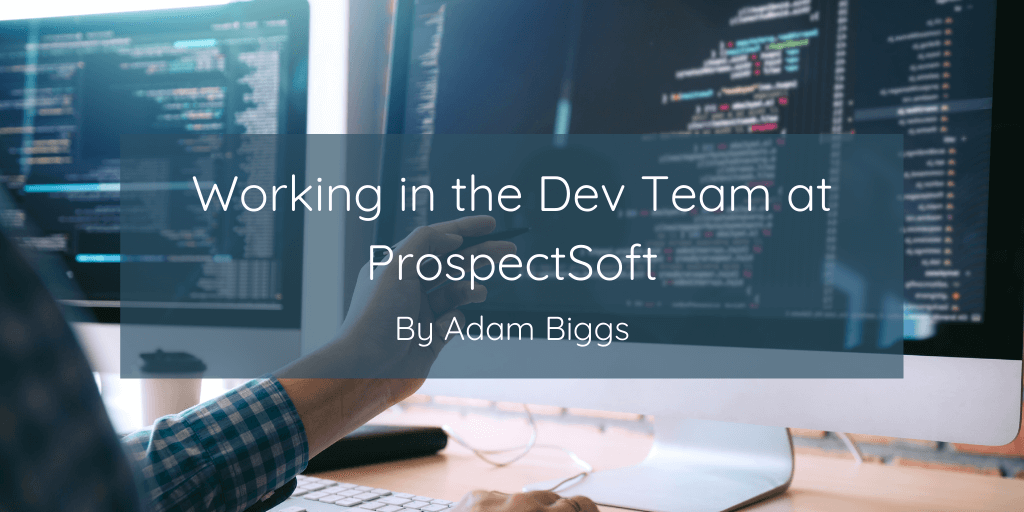 Check out Adam's blog to learn more about what a Development Placement at ProspectSoft has to offer!

Hi everyone, I’m Adam – one of ProspectSoft’s new Development placements. I’m now a few months into my placement year at ProspectSoft, and the amount I've learnt since starting my placement has exceeded my expectations. My University course covered a wide range of programming languages, theories and best practices - though never in quite so much depth or detail as the tasks I’ve been actively working on within the DevOps team! Despite only starting in the role recently, I’ve been developing several aspects of the CRM. One example of this is a redesign of an aspect of the front-end using the Typescript programming language to update the CRM’s Overview Dashboard. Other exciting tasks I’ve been getting stuck into include some coding in the OData back-end written in .Net Framework as well as with developer tools like the Operations Portal – something the DevOps team use regularly.

One of the greatest challenges for me to date has been getting to grips with how the expansive libraries within Prospect CRM interact with each other, especially within the language of Typescript, which I’ve had limited interaction with prior to this placement. However, with every day that passes (and every new task completed!) I can feel myself gaining more knowledge and developing my skill set. So, hopefully in a few short months I’ll progress rapidly through any new tasks!

So far, one of the biggest tasks I’ve worked on was the redesign of the Overview Dashboard - which is often one of the first things many of our users see when they log into the software! Despite it being tricky at first, other members of the DevOps team and my fellow placements helped me overcome some hurdles, then I was able to make steady progress on the task towards its completion. Another new yet cool experience for me was reporting the changes I implemented to the CEO, Andrew Ardron, to ensure the design was effective. This task gave me a much greater understanding of who the end users are, the designs they’re used to seeing and how they use the CRM and its many functions.

Though my University covered the developmental process in a module called Software Engineering (in what I then thought was a great amount of detail), I’ve discovered over the past few months other key elements that aren’t taught academically. From coding to functional testing, I’ve been active in every stage of the developmental process within the Agile Scrum team. For me the most interesting time is the development of new features, though both functional and QA testing play a crucial role in delivering a useful product!

I started at ProspectSoft with my fellow placements later than most other year in industry placements would do due to the outbreak of COVID-19. Despite that ongoing challenge, the whole team at ProspectSoft have endeavored to ensure that we placements have received the best training we could have given the circumstances. As such, we've all learnt a great deal, and in my opinion, much more than I expected to learn within just a few short months in the DevOps team!

If you’re a second-year student searching for a Placement Year where you’ll really make an impact, this role is not to be missed! Learn more about our Development placement opportunity here and apply now!

Development Placement, Placement Year, PS Careers, University
Your Guide to Balancing Uni Work & Placement Applications
By Beth Williams on Wed 21 April 2021
My First 5 Months as a Technical Services Placement
By Shiraz Siddiqui on Wed 31 March 2021
The Turn Ons & Turn Offs of Placement Applications
By Beth Williams on Wed 03 February 2021
Working in the Dev Team at ProspectSoft
By Adam Biggs on Tue 26 January 2021
From University to the Working World!
By Max Hawksworth on Mon 25 January 2021
Icons made by Freepik from www.flaticon.com