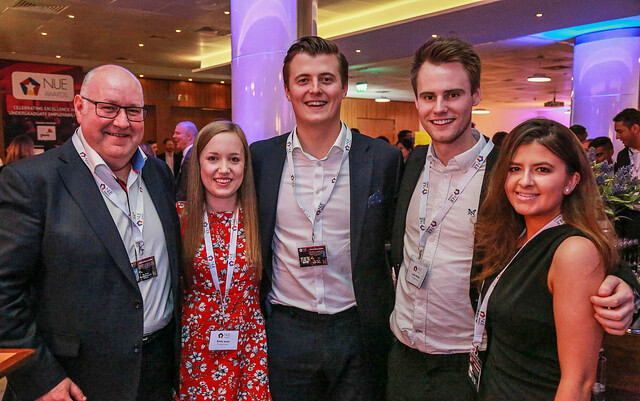 Hear about our awards application for the NUE Awards and about the evening itself here!

We all know that ProspectSoft is renowned for its award-winning placement scheme. To get you up to speed…back in 2009, the scheme won its first award in the ‘Best Work Experience Providers’ at the National Council for Work Experience. We then won the Best Small to Medium-sized Undergraduate Employer category at the National Undergraduate Awards (NUE Awards) from 2010 to 2014. But in the last two years, although we’ve been shortlisted, we haven’t had the honour of claiming this coveted prize. We’re not going to lie, we felt pretty sad about this! I mean, we think our placement scheme is great (maybe we’re biased), so how could we prove that the placement programme here really is the best?

We had to think bigger.

We were determined to put in an amazing application that would hopefully get us back up to the top spot. So, in October, we got our thinking caps on and tried to come up with an idea for our application that would stand out. After all, we knew that the judges probably read through lots of applications, so we had to think of something that would catch their eye. A video – we thought…but not just any video, one that was made by our placements from scratch. This involved a whole heap of work, including creating a storyboard, a script, and of course the animated video itself. It had to be creative, so we did plenty of planning, and came up with our ideas. Creating the video turned out to be such a fun process – we found out more about what the previous placements had achieved during their year, which included some pretty impressive stuff like the introduction of our new placement portal. Recording the voiceover for the video was a laugh too! (you can check out our video here by the way!). We submitted this along with our written application, and had everything crossed!

We were then over the moon in December to find out that we had been shortlisted! All the hard work that everyone put into the application was worth it.

Fast forward to February, and the day of the awards finally arrived. Myself and two other placements (Ollie and Luke), along with our Marketing Team Leader and Sales & Marketing Director, headed into London to attend the awards. RateMyPlacement had clearly put a lot of effort into organising this event – there were lots of creative stands, and the food was so good! We got the chance to network with other placements, University students, University societies, and a wide range of companies. The awards had a great atmosphere, and everyone there was enthusiastic about promoting the benefits of placement years.

It was fantastic to hear from Rebecca Adlington, the guest speaker for the evening. Her story about her pre-Olympic training whilst she was a child, her first Olympic Games in 2008, and her final Olympic medal at the 2012 Olympic Games was inspiring. We even got a picture with her!

After a second networking break, it was time for the big event. The first set of awards were given out to Universities and students…so as you can imagine, the nerves set in!

The time finally came for our award category…to say we were nervous and excited all at once is an understatement! Rebecca Adlington read out the introduction about the winner, and the more she said, the more we knew – WE WON! Getting to go up on that stage was such a great feeling, and to be recognised for all the hard work that both the placements and the staff at ProspectSoft put into the scheme is brilliant.

Once again – thank you to RMP for a great evening. You never fail to put on a fantastic awards ceremony! We’re ecstatic to have won the award for Best Small to Medium-sized Employer for a fifth time, and are proud of all that we’ve achieved so far with our placement programme!

Awards, NUE Awards, Placement, Placement Year, RateMyPlacement, SME, Winners
Mental Health Awareness Week at ProspectSoft
By Lucy Crossland on Thu 19 May 2022
Working in DevOps at ProspectSoft
By Cameron Webley on Fri 06 May 2022
The Road to Becoming a Technical Services Pro
By Abigail Whitwham on Tue 19 April 2022
5 Reasons Why you Should do a Placement in Sales
By Will Butler on Mon 28 March 2022
Halfway Through my Journey as a Customer Success Placement
By Maddie Finlay on Thu 03 February 2022
Icons made by Freepik from www.flaticon.com