By Katie Wright on Tue 27 February 2018 in Placement Blog Read to find out how we secured a 6th time win at the NUE Awards hosted by RateMyPlacement!

ProspectSoft's history at the NUE Awards

In the past 13 years, our placement scheme has been repeatedly recognised on a national scale as award-winning, demonstrating the hard work put in from both the placements and the rest of the company. From 2010 to 2017, we’ve placed as a finalist 3 times and taken home the trophy 5 times at RateMyPlacement's NUE Awards for “Best Small to Medium-sized Undergraduate Employer”. This year, RateMyPlacement have recognised more SMEs through shortlisting 9 others in our category as opposed to having 5 shortlisted in total. The competition was immediately raised – the odds were against us, and we knew this would be the hardest year yet.

Our application this year was largely focused on recent critical business changes ProspectSoft have gone through – from the new office, to the change to a SaaS business model. These things had a huge impact on our business, and the placements were pivotal in this process.

To make sure our application was the best it could possibly be, a lot of research went into finding out the best way to present our application to the judges. As last year’s videos application was a huge success, coupled with research which states that 4x as many people prefer to watch videos, we knew that a video application would be the most effective and impressive method to win the judges hearts. After many script drafts, storyboard creations and recording of voiceovers, the video was complete and the application was sent off and we had our fingers crossed…    A few months later, we received that all important email we’d been eagerly waiting for – ProspectSoft had been shortlisted! We knew that we were now one big step closer to winning that trophy!

The awards took place on Friday 23rd February and were held at etc. venues 155 Bishopsgate in London. Current placements including myself and Cameron, as well as returning placements and our Sales & Marketing Director represented ProspectSoft on the day. Not going to lie, I was pretty nervous, yet excited at the same time! We all met up for some lunch before heading off to the venue. The awards officially started, and being sat front row, we were looking forward to the inspirational talks from different employers and guest speakers. As we took our seats I was pleased to see the ProspectSoft advert I created in the NUE Awards Programme. 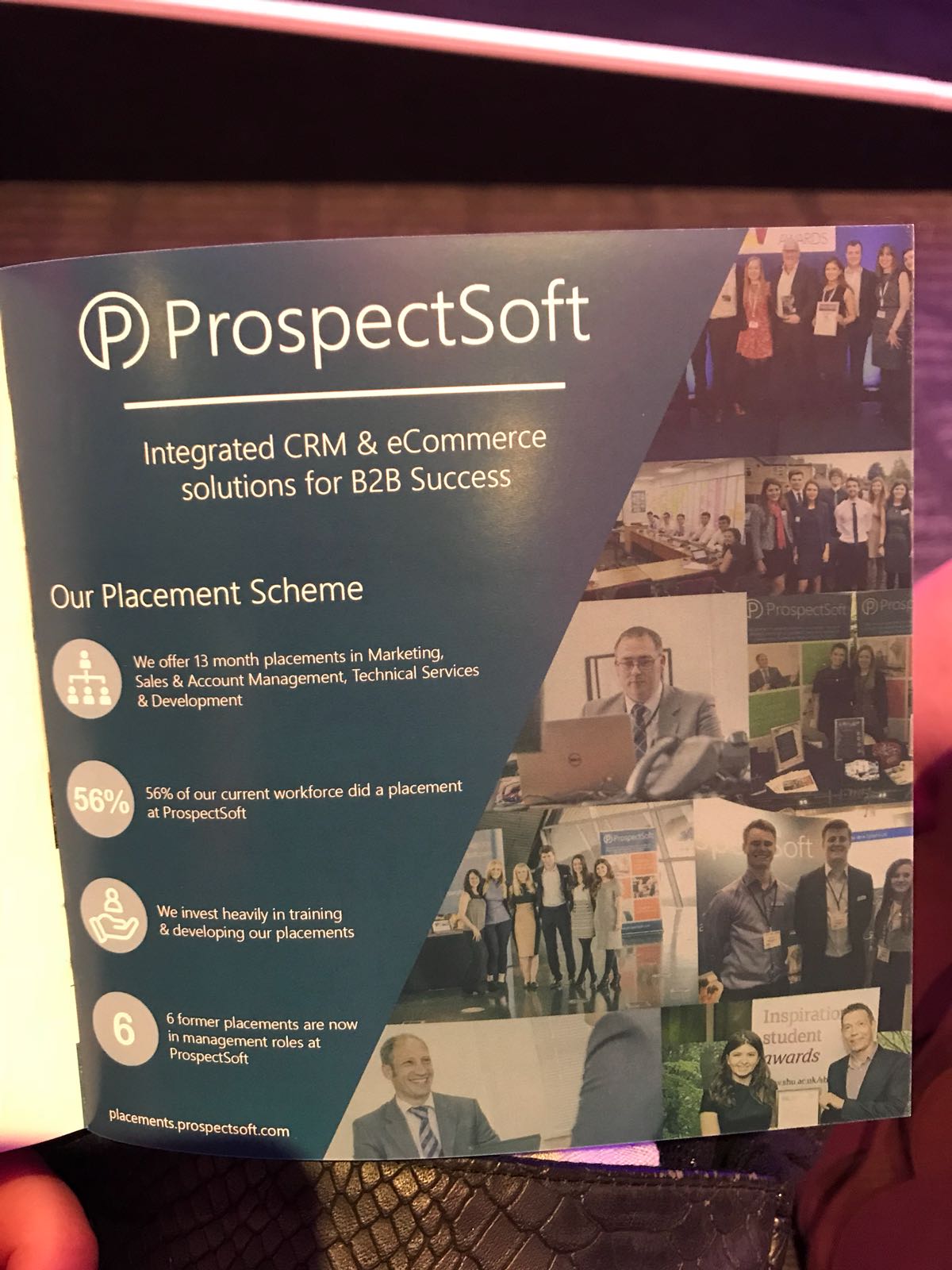 After a few talks from both the Co-Founder of RMP and other employers, it was time to have the first break of the day and start the celebration with prosecco and brownies! This networking break was a fantastic opportunity to communicate with other employers about their initiatives for undergraduate employment. For me, one of the highlights of the day was hearing from a special guest, Ade Adepitan, MBE, Great Britain Paralympian and well-known TV presenter. He spoke about his journey in becoming a Paralympian – from enjoying sport at school, to achieving a Bronze medal in the Paralympics. Ade also showed us emotional footage of significant moments in his career and other aspiring experiences he's been through throughout his life. The whole speech was truly inspiring and memorable – there were definitely a few teary eyes in the audience! My line manager and I even got the chance to meet and take a photo with Ade… 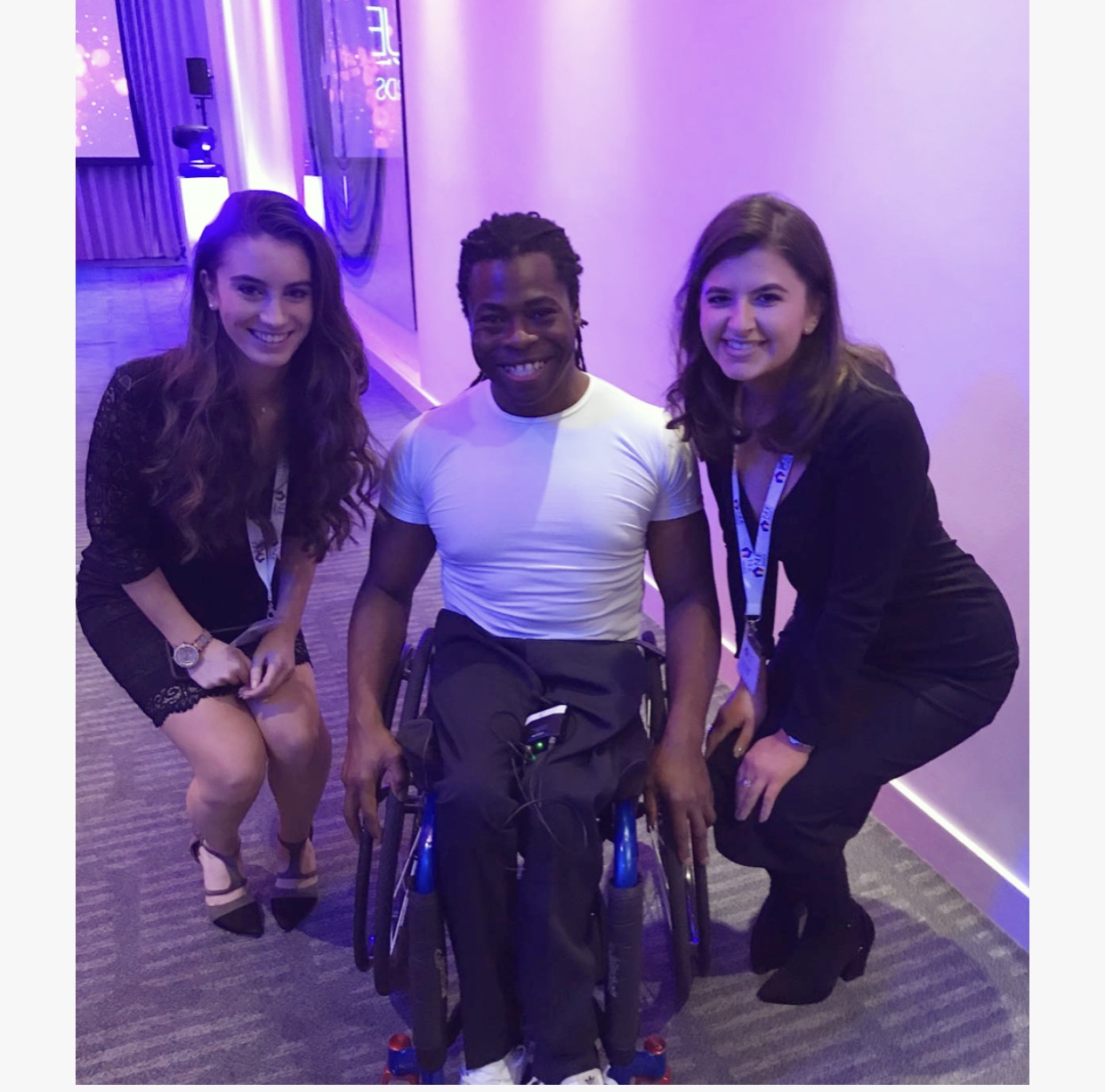 After the talk it was time for some street food and more drink! The atmosphere of the whole event was so inspiring but also entertaining! There was a Jazz band playing throughout the breaks, a magician performing, and different stands of remarkable street food and champagne filling the room!

Fast forward to 6pm and it was finally time for the ceremony to begin! There were several awards being presented, with our category being one of the last, meaning I had plenty of time to build up the nerves! But the nerves were all worth it when our category was introduced and the winner was announced as…ProspectSoft!!! I couldn't explain my excitement when I heard our names being read out. All the hard work that I’d put into the 7-minute animated video was so worth it. Now, ProspectSoft being ProspectSoft, we began celebrating from that point on! The awards were an amazing experience - definitley up there as the biggest highlight and achievement of my placement year to date. We were all so pleased we secured our 6th win for this award, and returning placement, Emily Scott, also placed as a finalist for the award “Best Student Contribution to a small to Medium Sized Employer”. Overall, an amazing result!

NUE Awards, Placement, ProspectSoft, Undergraduate. RateMyPlacement
Mental Health Awareness Week at ProspectSoft
By Lucy Crossland on Thu 19 May 2022
Working in DevOps at ProspectSoft
By Cameron Webley on Fri 06 May 2022
The Road to Becoming a Technical Services Pro
By Abigail Whitwham on Tue 19 April 2022
5 Reasons Why you Should do a Placement in Sales
By Will Butler on Mon 28 March 2022
Halfway Through my Journey as a Customer Success Placement
By Maddie Finlay on Thu 03 February 2022
Icons made by Freepik from www.flaticon.com