My Experience as a Technical Services Placement So Far! 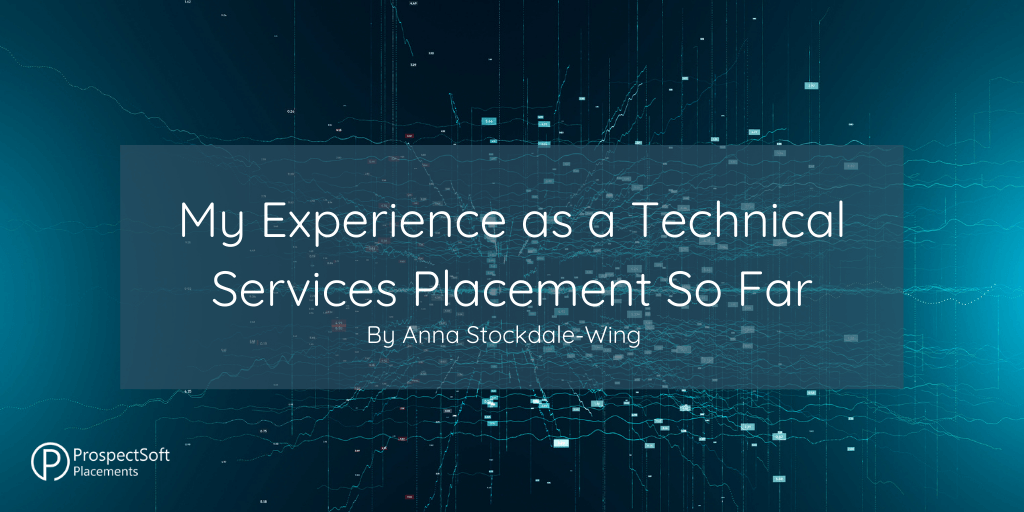 Hi, I’m Anna, and I’ve been working at ProspectSoft for 2 months now, working actively in my role for around a month. Starting a placement was daunting at first – of course, there's all the normal nerves before starting a new job, but there was extra uncertainty with COVID-19, as we didn’t know how we’d be working or if we’d be able to access everything we needed. It’s been a crazy time, but ProspectSoft were great at keeping us informed as to what was happening at the right times. Even when we were told our placement start date was being delayed by a couple of months in accordance with lockdown, they made sure we knew what was going on so that we had more than enough time to prepare.

Up until Tier 4 was announced in December 2020, we were training and working in the office with the other placements and a few members of staff. They made sure that there was always a permanent member of the team with us so we could ask them any burning questions immediately, so that we weren’t stuck waiting for a response. I definitely think this helped us really get into the mindset of working professionally, since a lot of University students (myself included) haven’t had much experience of the working world until now! Although it might not seem like a big deal, the environment you’re working in does have a huge impact on how you approach something, so being in the office makes work seem more “real” and puts us in the right hardworking mentality. That kind of thing wouldn’t have been possible if we started working from home straight off the bat. However, us placements and our managers now feel confident that we’re ready to work independently where possible, so working from home has been the latest change since the new restrictions were announced in early January.

In terms of working in my role specifically - at first, it was a little bit overwhelming, admittedly! There’s a lot to learn, and there were plenty of nerves about some aspects of the job (especially being on a customer’s live system - eek!). I was constantly worrying that if I messed up then things would go up in a ball of flames. The first few days on the job were tense to say the least! When I’d answer calls and a customer asked me a question, I’d stop in my tracks, my brain would go completely blank and I suddenly forgot everything I’d learned in training! But this is totally normal...a member of the team in training said, and I quote - “You’ll pick up the phone, forget who you are, where you are and run around the building clucking like a chicken.” That stuck with me, but I can honestly say, hearing that helped so much with calming my nerves! And that’s just one example of how open and helpful the team are here with everything. You’re made to feel like part of the company, not excluded from the “real employees”. There’s a good balance of being supported without being coddled. You’re given actual responsibilities and do the same job as other full-time members of your team.

Normally, ProspectSoft have a handover period in place, where new placements shadow the outgoing placements for a week or so, helping new placements learn the ropes from those doing the job. But unfortunately, with the pandemic situation, that wasn’t possible this year. Obviously, this would have been ideal...I think you’d agree that there’s a little less fear of embarrassing yourself when asking silly questions to your peers than there is to your new manager! But there was no need to worry - the team have more than made up for it by giving us more leniency for not knowing the answers. Plus, a bunch of them did a placement here anyway, so they’ve been in our shoes!

In terms of my day-to-day responsibilities, on the face of it, it might not sound like too much. I answer calls from customers, log tickets for issues, work on tickets whilst maintaining constant communication with the customer and troubleshoot issues by going into their system (either remoting in or support elevating into their CRM). However, the knowledge required is massive. You need to know how the system should work and think on your feet (quickly!) as to what the possible root causes are. You then need to determine whether something is a temporary issue or an all-out bug, try to recreate an issue (possibly without even knowing the full/exact steps), and decide how something should be prioritised - and that’s just the tip of the iceberg!

There are also specific technical skills needed to do these things, such as SQL and command line knowledge. Strong communication skills are also critical in order to interpret a customer’s problem, empathise with them when they get frustrated, and clearly explain something in a way that’s easy to understand. As you can see, there’s much more to this role than some might think!

I’m so glad that I got this placement because of all these things. Not only am I learning the system, but I’m able to see how things I’ve learned in University theory apply to a real working environment. There are also the softer skills that you can’t learn during lectures, like critical thinking skills, problem solving and team working that just isn’t the same as group assignments at University. All of this is just the first month in my role so I’m pretty excited to see what the rest of the year has to offer!

Like the sound of my role? Get your application in – and be quick! Here’s more about what’s involved and how to apply!